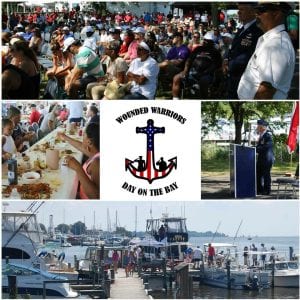 2012 – The First Wounded Warriors Day on the Bay

As the planned date for the first Day on the Bay approached, founder Jim Diven realized that North Point’s members did not have large enough boats to accommodate the attending warriors and their families.

Jim sought the help of other yacht clubs. Commodore John Polek of Galloway Yacht Club stepped up and volunteered his own boat and solicited additional volunteers from his club. In no time at all, Jim’s event went from a handful of boats under 25’ to a dozen boats sized from 28’-45’.

The next step was to find donations of food and drinks and gifts for the adults and school supplies and toys for the kids. Once again, volunteers from North Point and Galloway came forward and before long there were donations of hamburgers & hot dogs with the fixings, soda, water, and enough money to purchase gift bags full of goodies for everyone. The Ladies Auxiliary of North Point donated desserts. North Point members came out in full force to staff the event from beginning to end. It was even decided to treat the guests to a crab feast after their cruise.

On August 25, 2012, under Jim’s leadership, members of the North Point Yacht Club, with assistance from Galloway and other Baltimore area yacht clubs hosted a Wounded Warriors Day on the Bay at its facility on Jones Creek. The event was a huge success with over one hundred participants, both wounded veterans and their families from Fort Meade and Aberdeen Proving Ground. The event even received recognition at the Pentagon! 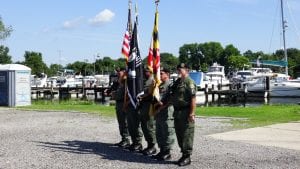 The attendees were welcomed with an Honor Guard as they arrived at the Yacht Club, greeted in a ceremony by the Commodore, and addressed by the Command Sergeant Major from Aberdeen Proving Ground. As guests were arriving, their children had a great time playing at this beautiful waterfront facility. They were offered hot dogs, hamburgers, corn on the cob, and snow balls. Each child was given a gender-specific gift bag.

Following the ceremony, all of the invited guests boarded two dozen private boats for a 2 hour regatta cruise that included a view of Fort Carroll, the Key Bridge and the Francis Scott Key Memorial Buoy, where the words to our National Anthem were penned. Sponsors provided refreshments for the guests while aboard the boats. Upon their return to North Point Yacht Club, all of the guests were treated to a crab and shrimp feast. Each Wounded Warrior was given a gift bag that included a “Wounded Warriors Day” hat and $25 gift card from Target or WalMart.

The Wounded Warriors Day on the Bay has continued to grow and evolve.

In 2014, the event planners established a relationship with Wounded Warrior Project to locate, coordinate and register invitees. That year, the event drew 150 guests, 60 volunteers, and 32 boats up to 50’. Nearly a dozen area yacht clubs were represented by captains and boats. Fifteen bushels of steamed crabs, fifty pounds of steamed shrimp, hot dogs, hamburgers, Bar-B-Q, and more were available to the guests.

As in the past, the 2014 event was truly a stress-free day for the wounded warriors and their families. Once again, each family received gift bags and gift cards. The warriors were recognized during a ceremony and thanked for the service. When the event was over, the volunteers were also treated to the crabs and shrimp.

At the event follow-up meeting, the planners realized that there was some money left over. The donor committee had done an amazing job. Then, without question, it was decided to purchase 100 – $50 gift cards to be delivered to the local WWP coordinator and given to needy warriors in the local area.

The group wanted to do more. For 2015, the number of guests increased to 175, the number of boats & captains increased to 40, and the amount of donations of food and gifts easily kept pace. The event had become known all around the Chesapeake Bay Yacht Club community. Wounded Warriors asked to come back again. Captains asked to volunteer. Donors asked what else they could do. So, it seemed that 175 guests also weren’t enough…….

Could the event accommodate more?

The committee said YES…..so, since then, the event has increased to 200+ guests.

In 2018, Wounded Warriors Day on the Bay hosted a new event for Vietnam-era veterans. It was another huge success and is now on the schedule as an annual event. 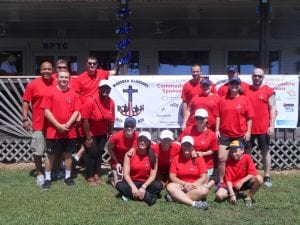 Please help us to give back to those who have given so much.

END_OF_DOCUMENT_TOKEN_TO_BE_REPLACED

Thanks To Our Sponsors